The City of Bunbury is a vibrant coastal town located 175km south of Perth, Western Australia. The town features a unique waterfrontage, with the Indian Ocean to the west and the picturesque Koombana Bay to the north.

The Marlston Waterfront precinct is situated along the bay’s foreshore and features a modern esplanade with bars, restaurants and cafes. The precinct is built on reclaimed land which is retained by a reconstituted limestone block wall. A 100m long concrete walkway spans the length of the esplanade between the restaurants and the limestone retaining wall.

As Koombana Bay opens out to the ocean, the Marlston Waterfront precinct is subjected to constant sea movement. Over time, waves and tidal activity had compromised the seawall’s foundations, greatly reducing the soil density, and causing voids to form due to a wash out of sand and other loose material. The erosion resulted in the settlement and rotation of a 30m section of the wall with a structural crack appearing along the wall just below the high tide mark. In addition, a large crack appeared in the concrete path behind the wall running for almost the entire 100m length.

As the Marlston Waterfront precinct is a popular destination for both locals and visitors, the City of Bunbury was concerned about the structural integrity of the seawall and surrounding buildings. A contractor was engaged by the City of Bunbury to remediate a 30m section of the wall at the northern end. These works were partially successful but proved to be very expensive and the City also remained concerned about the structural integrity of the remaining untreated section of the wall.

Having worked with Mainmark on another project, the City of Bunbury’s consulting engineers contacted Mainmark regarding an alternative solution. Mainmark, in collaboration with the engineers, presented an alternative recommendation to the City of Bunbury which was subsequently approved. However, the City of Bunbury was required to issue a tender to obtain competitive pricing. After demonstrating exceptional capability and value for money, Mainmark was appointed to complete the works, which included strengthening the soil supporting the seawall and filling voids where sand had been washed out due to tidal movement. 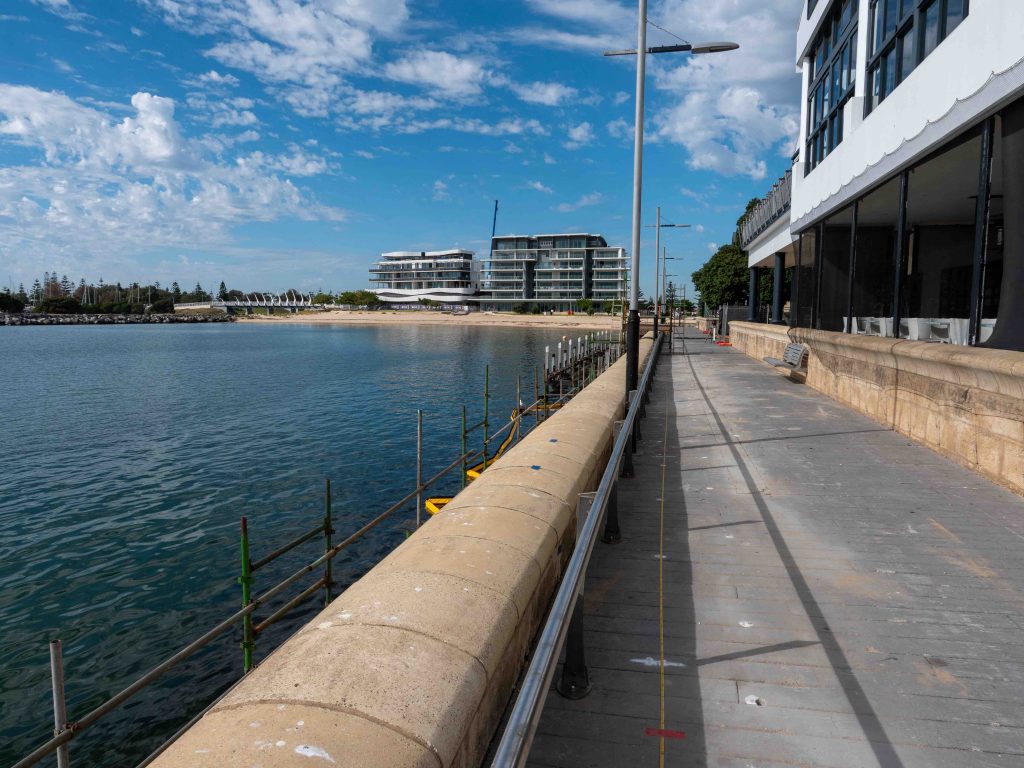 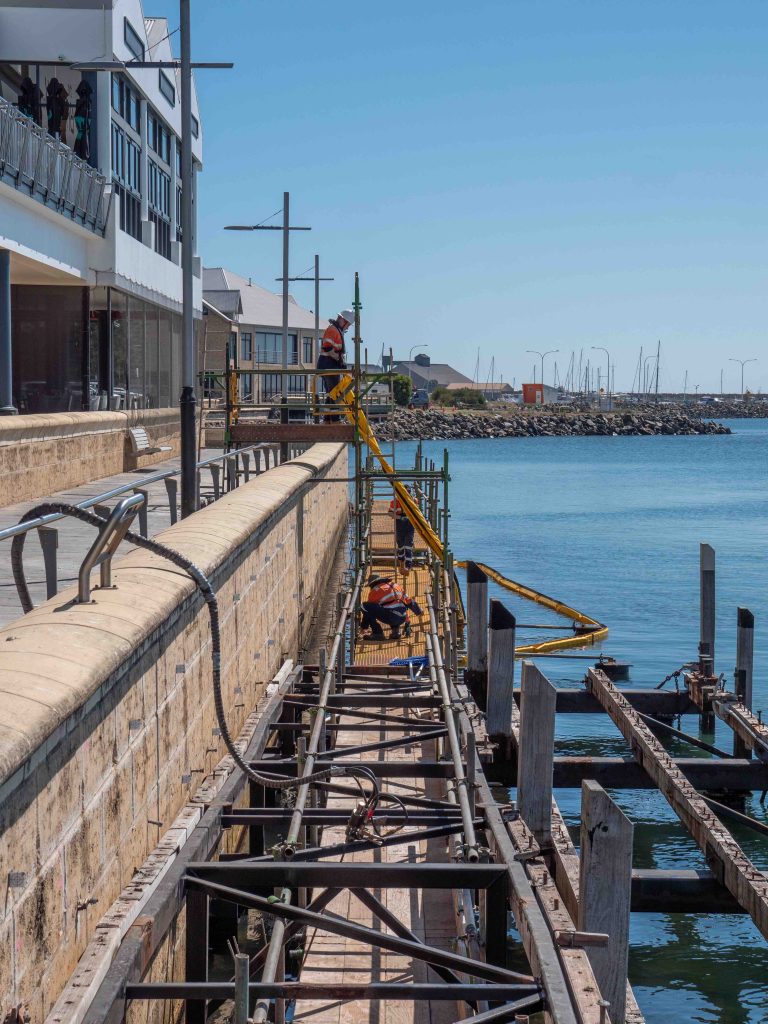 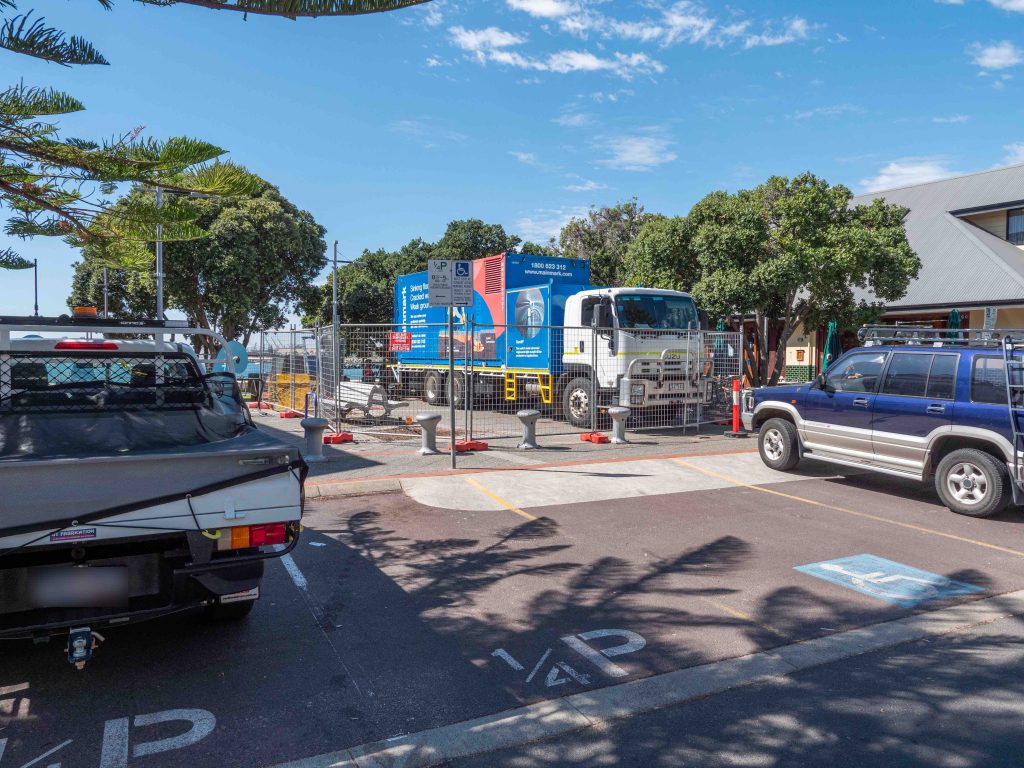 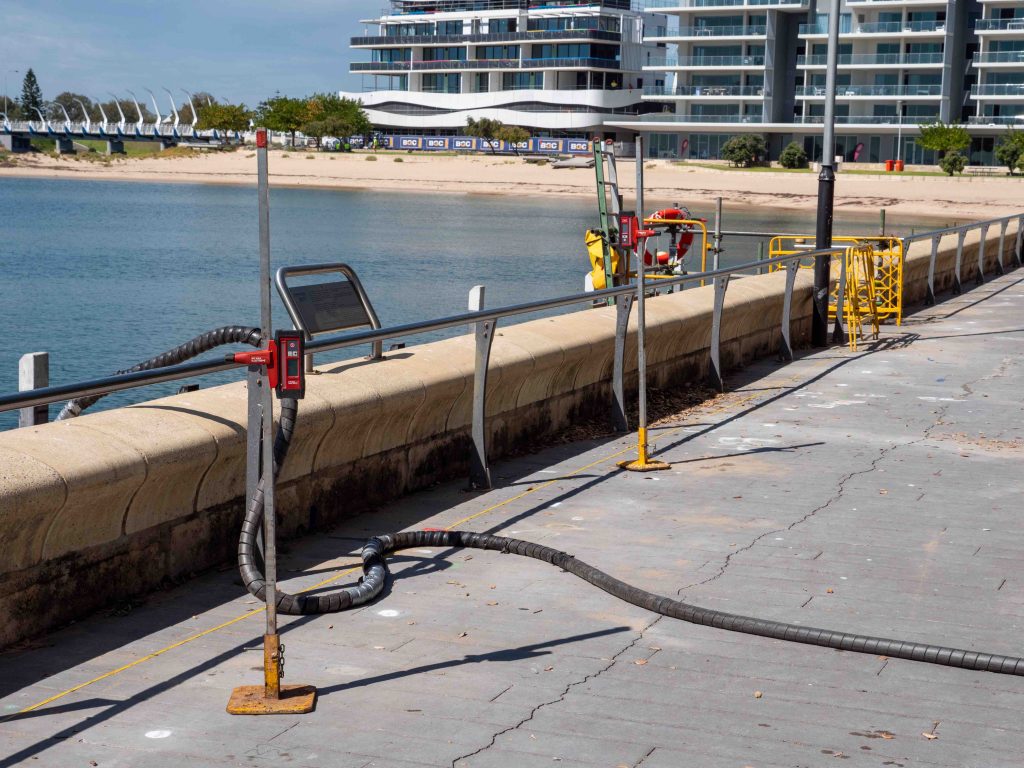 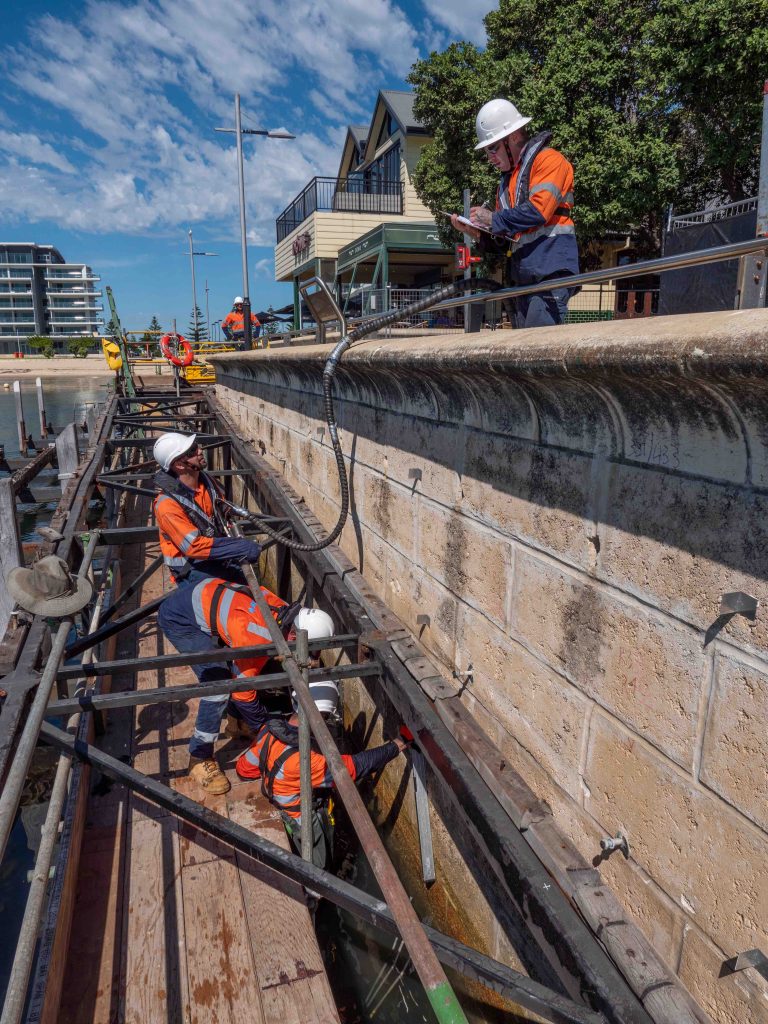 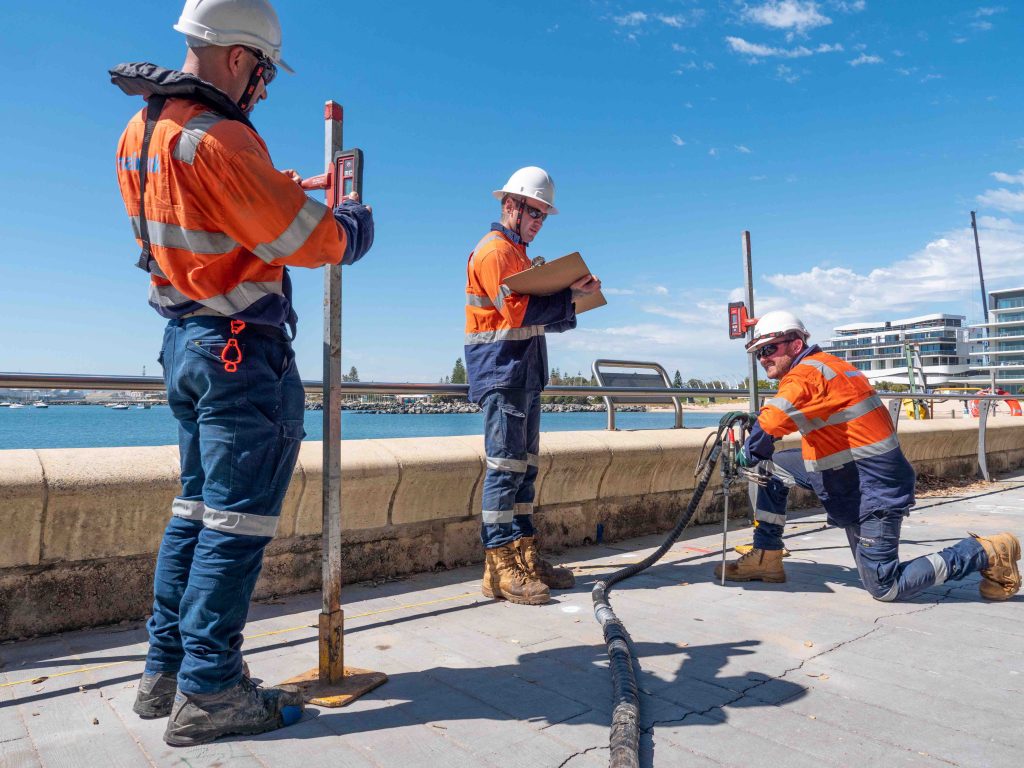 Mainmark was required to re-support the seawall’s footing and fill voids beneath the precinct’s walkway and the base of the seawall. It was important that the solution would not add any lateral pressure on the wall. As businesses near the seawall were still operating, it was also important that the work be carried out with minimal disruption during trading hours.

Due to its non-invasive application process, Mainmark’s proprietary Teretek® engineered resin was identified as the ideal solution to re-support the seawall, consolidate the foundation ground and fill any voids created by the tides. Teretek is an expanding and fast-acting polyurethane resin solution that is injected deep into the ground through small 16-25mm diameter tubes, to increase bearing capacity and re-support structures.

Mainmark injected Teretek into specific points along the seawall and pathway to address areas where subsidence and poor soil compaction had become problematic. This required the team to drill into the seawall 1m below the waterline. To accomplish this, ladders, platforms and scaffolding were erected on the sea-side of the wall to allow the crew to access the treatment areas with sufficient working space and facilitate the required pattern of drilling, both vertical and at specific angles.

The Mainmark team worked along the wall and 100m concrete walkway, injecting Teretek into the path and the ground beneath the seawall’s footings via 340 treatment points with 4 rows of injection tubes spaced 1.5m apart. The expanding resin remediated the subsidence by increasing ground bearing capacity and filling voids, helping to prevent future issues of soil erosion and settlement.

The challenging site conditions required Mainmark to modify the injection process due to the difficulties in drilling underwater and through the rock protection at the base of the wall. As the boardwalk and jetty were also undergoing separate remediation procedures, Mainmark needed to work around a steel sub-structure that was essential to the boardwalk and jetty upgrade and could not be removed. To ensure the project remained on track, Mainmark overcame the access issues by working in small teams which helped to alleviate congestion around the site and minimise foot traffic on the scaffolding. These operational adjustments and teamwork streamlined the entire process, which delivered added cost savings to the client.

With three restaurants and a micro-brewery located adjacent to the works, this high-profile and complex project required Mainmark to work in challenging conditions in close proximity to the public. Despite the challenges, the project was successfully completed in just 6 weeks with minimal disruption to the precinct and the surrounding restaurants, which remained open and operating at full trading capacity while Mainmark was on site.

City of Bunbury senior engineering technical officer, Ian Browning, applauded Mainmark’s professionalism, expertise, and the team’s creative approach to problem solving “The seawall’s function and location between businesses and the seaside prevented us from any significant investigation; we could not dig out any of the wall without risking its structural integrity. Therefore, the job created a certain amount of difficulty when determining the true scope of the work and scale of the issue.”

“We learned a lot during the injection process. Mainmark’s Teretek solution was able to be easily applied and highlighted the depth of erosion and soil movement. The team that worked on the wall was excellent. Mainmark’s solution was considerably more affordable compared to other solutions such as concrete piling and minimised further impact to the seawall structure. The process was also quite interesting to watch and a total game changer. I couldn’t fault the team that did the job.”