Methanex is the world’s largest producer and supplier of methanol, a highly volatile and flammable liquid chemical that is used widely for a variety of industrial purposes.

The clear, biodegradable liquid is recognised as an environmentally friendly, energy efficient and clean burning fuel source. Methanex is the only manufacturer of methanol in New Zealand and operates three storage plants in New Plymouth, Taranaki, producing up to 2.2 million tonnes of methanol per year.

After decommissioning one of its methanol storage tanks for maintenance, Methanex discovered differential settlement under the tank’s steel plate slab. The tank, measuring 45.7m in diameter and 20.9m high, was built on a concrete ring beam foundation with internal steel floor plates. The tank had previously been re-levelled in 2007, however following a 2017 survey it was discovered that the internal floor plates had subsequently subsided up to 250mm in some areas.

Mainmark was appointed to re-level the tank’s floor plate and undertake necessary ground improvement and subgrade void fill work across a 300m2 area inside the tank, using its JOG Computer-Controlled Grouting technology.

Prior to commencing the work, there were a number of challenges that the Mainmark team needed to consider. Not only were technicians required to work within a confined space inside the tank, working within any location where residual methanol (a hydrocarbon that burns with a clear flame) could be present is a potential safety hazard and creates logistical challenges that needed to be addressed to ensure the team were safe at all times.

The process of drilling and injecting material into soil where there was potential for methanol to be present, was also considered high risk due to potential combustion, requiring a series of tests and concentration measurements to be completed. Mainmark and Methanex worked closely together to modify the project processes and mitigate any risks. Timing was also critical for Methanex due to the costs associated with downtime of the tank while the repair works were undertaken.

The Methanex project highlights how adaptable the Mainmark team were to changing circumstances and their ability to overcome challenging situations as they arose. Due to the COVID-19 pandemic, the project was interrupted half-way through in March 2020 as New Zealand went into Level 4 restrictions, recommencing 8 weeks later in May. Despite the need to operate around new hygiene and operating protocols, such as social distancing, the project was successfully completed in June 2020. 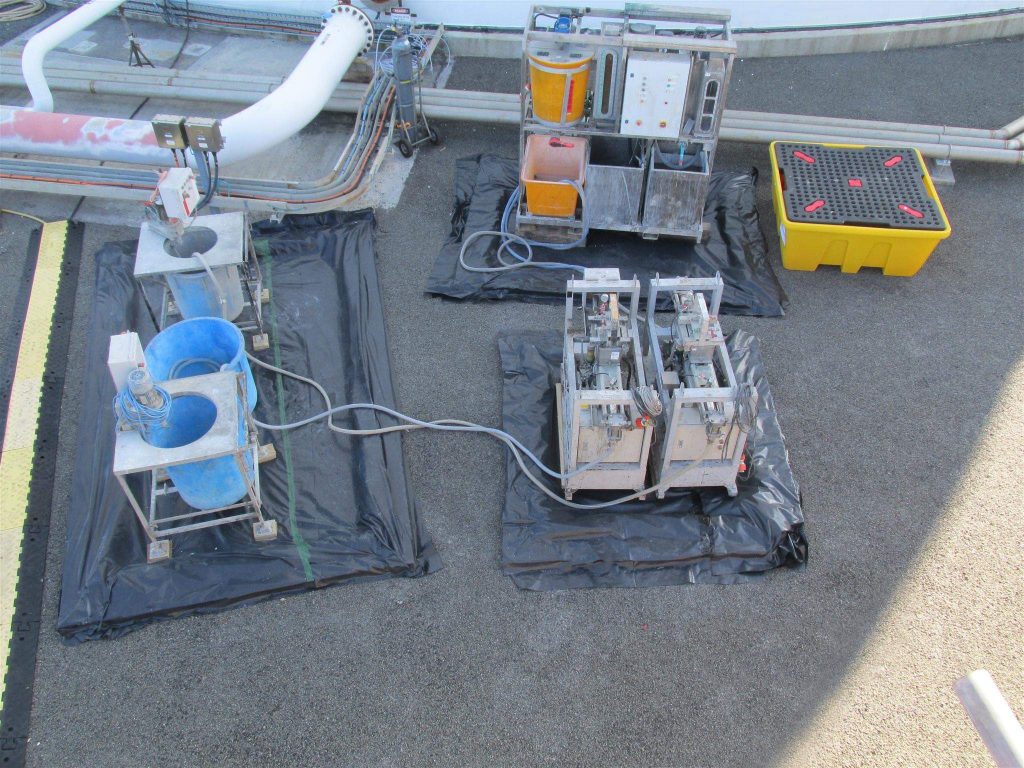 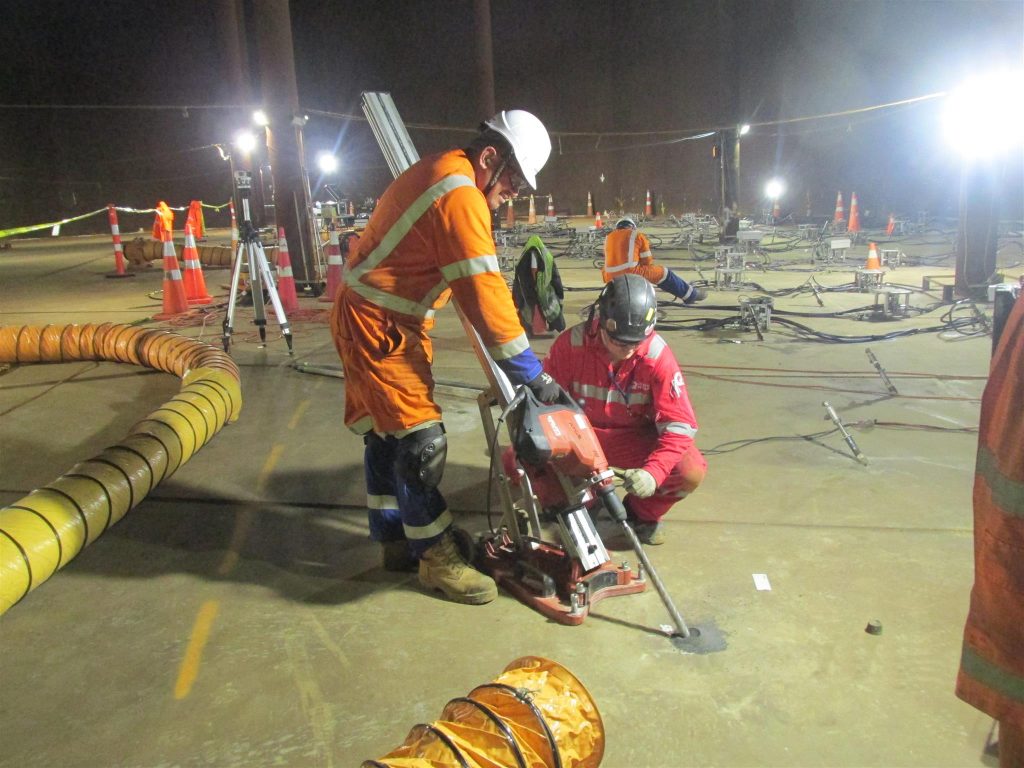 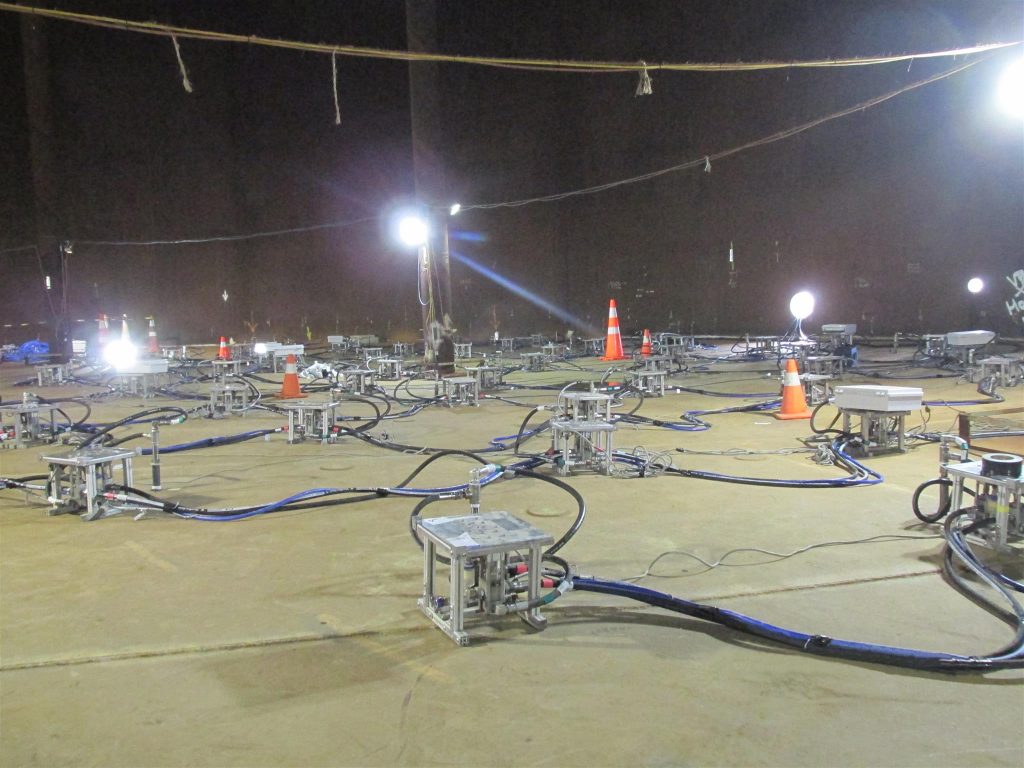 A solution to re-level the subsided floor plates, bringing them back to their original elevations as marked in cross sections within the Survey Report, was essential. The level correction work was required to be completed within a tolerance of +/-20mm of the tank’s original construction. In addition, ground improvement was carried out to the weak soils supporting the tank, increasing their capacity to mitigate future subsidence.

The solution also needed to safeguard the structure from damage during the re-levelling and that the material used was stable and did not cause environmental issues.

Mainmark was required to work closely with Methanex and Aurecon engineers to ensure the works were undertaken in a controlled, monitored, and transparent manner, which included applying the solution from inside the tank’s confined and hazardous space.

Given the complex nature of the project, Mainmark used its JOG Computer-Controlled Grouting technology to re-level the floor plates and improve the ground beneath the steel tank. JOG is an advanced, award-winning technology that uses an extremely precise method to re-level and strengthen ground beneath large structures. It raises sunken foundations and improves bearing capacity, and has been used extensively to remediate structures that have been impacted by subsidence.

The process is fast and efficient, with a proprietary mix of cementitious grout applied to strategically identified areas beneath the slab using a series of narrow injection ports. These ports require a 40mm diameter penetration and are simultaneously controlled via a central computer unit which monitors up to 128 injection locations at any one time.

As the client was concerned about the potential presence of methanol beneath the steel slab, Mainmark modified the injection process to help ensure the environment remained safe and risks were minimised.

Once Mainmark had clearance to commence work, the crew was split into two teams with the plant/rig operators stationed outside the tank and the injection technicians and tube extractor operator working inside the tank. The team was in constant communication using UHF 2-way radios. The JOG hoses, which were connected to the Mainmark operations unit outside, were threaded through the wall via the methanol connection pipes which are normally used to pump methanol to shipping containers.

Once inside the 1,600m2 tank, 90 JOG injection points pre-drilled into the steel planks were established across the subsided 300m2 section. Each injection point required a core drill to be cut through the steel plate at the base of the tank. Different mixes of JOG grout were used for void filling, ground improvement and foundation lift, with the solutions applied at five different depths (3m, 2.5m, 2m, 1.5m and 1m). The slab re-levelling only required JOG grout underneath the floor plate on top of the improved ground, consisting of primary vertical and secondary inclined injections. The works for each depth were executed in two different stages: 60 x 3m vertical injections were drilled first, followed by 30 secondary inclined injections, 2.5m and 1.5m deep, with the inclined tubes reaching the largest area from the minimum number of cores.

All the injection points were positioned close to each other, and so were expected to have a similar sandy soil type, based on the geotechnical reports. However, Mainmark’s technicians discovered that a large portion of the injection points were in clay pockets. The presence of clay presented a number of difficulties due to its cohesive nature, slowing the drilling system productivity. A modified drill bit was required to facilitate the injections, and extraction tubes were removed. Mainmark engaged a local supplier to create a bespoke 3m drill bit specifically for this project.

Drilling and injecting material of any kind into methanol contaminated soil is a high risk activity and Methanex required the appointed site manager to continuously monitor the site for the presence of gas and manage risk.

During the JOG injection process, the ports were continuously monitored and controlled using an automated monitoring system and JOG’s central computer unit, that allowed for continuous data output on the relative lateral and vertical movement of the structure to millimetre accuracy in real time. All injections were carried out as one continuous operation, delivering the grout to each point in the quantity required. This process ensured the structure was raised evenly and gradually without causing any undue stress.

The JOG Computer-Controlled Grouting resulted in soil compaction and improved bearing capacity, with the tank returned to its original level within a tolerance of +/- 20mm. A maximum lift of up to 179mm was achieved, located in Axis C, approximately 16m from the centre of the tank. Importantly, the JOG material did not have any adverse environmental reaction to the methanol contaminated soil.

The COVID-19 pandemic shutdowns interrupted the project, resulting in the project timeline extending from an anticipated 34 days to 55 days. Despite this, a very complex project was successfully completed safely and to the highest standard.

“Mainmark’s contract scope was completed within budget and schedule by the experienced and dedicated site workforce, allowing for the impacts of COVID-19 delays. Their ability to adapt to changing situations within the ‘confined space environment’ of the subject tank, and their interface with other trades in undertaking the respective work scopes, contributed to the completion of the total tank floor remediation project, and the tank’s successful return to operational service,” said Phil Gard, Project Execution Lead – Methanex. 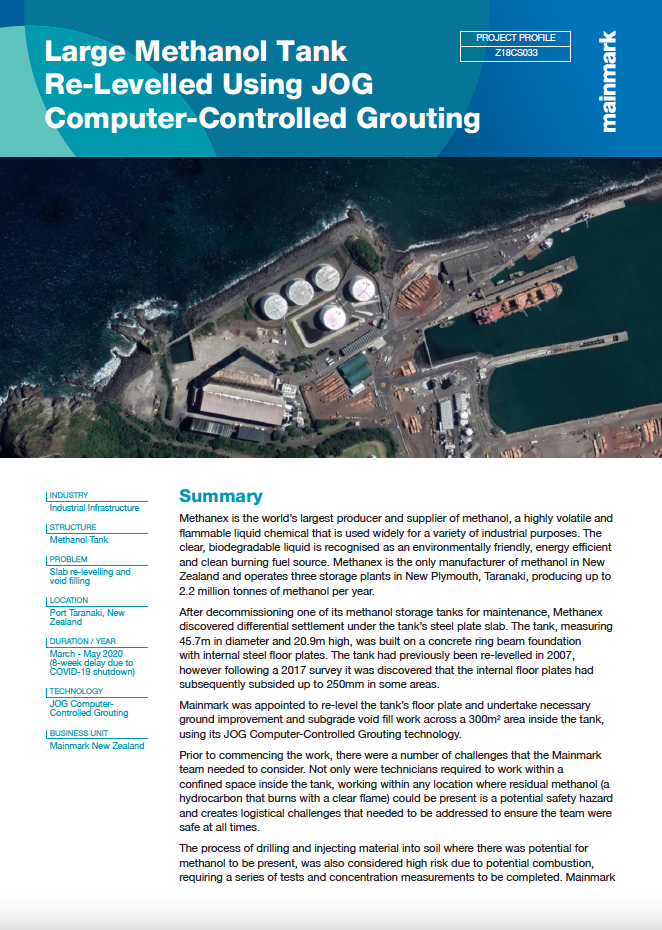