Equally, weak ground cannot adequately support the weight of structures, thereby causing subsidence. Uneven floors, fractured floor tiles and wall cracks are all strong indicators of weak ground beneath the structure. If a building or structure has subsided due to ground instability or weak ground, it is important to fix it right away, or risk further damage and potential hazards. 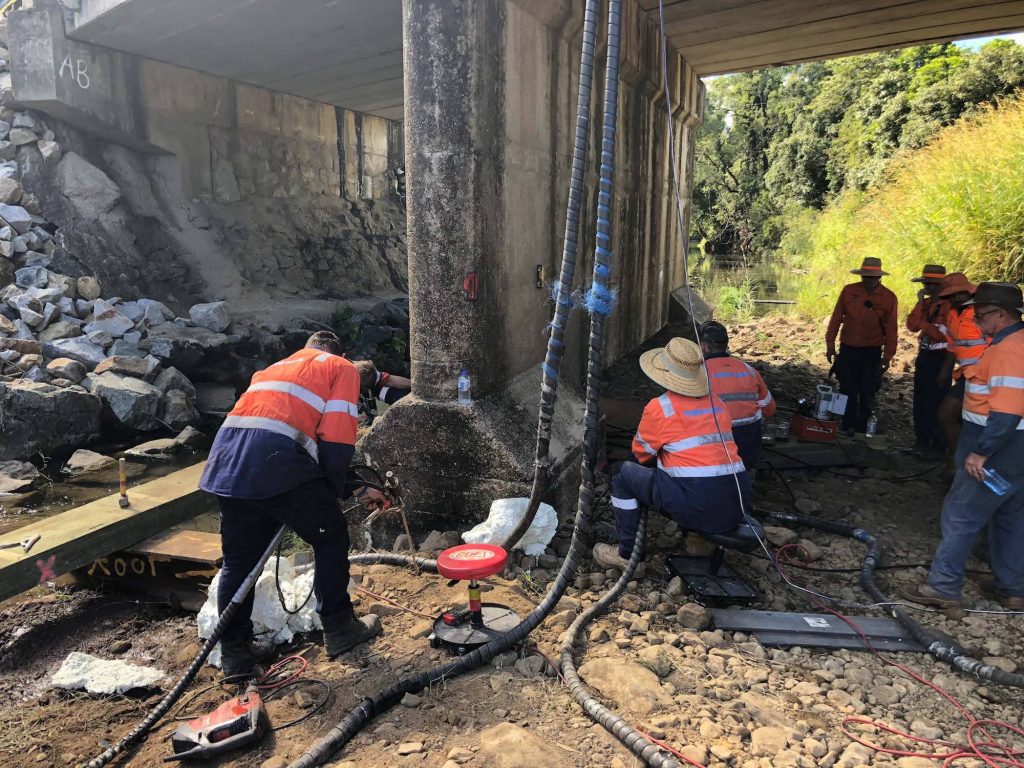 Re-support and re-level the bridge pier and rectify the ground settlement to help ensure it could continue to safely bear the weight of constant traffic, including heavy vehicles

Fill the voids beneath the railway line, re-support the slab and lift the track back to its original level whilst bonding the subgrade and cracked base slab to the tunnel base rock.

Sunken roads and runways, or uneven paths and driveways can all indicate ground instability and weak ground under infrastructure, which can have serious consequences. Mainmark has successfully raised, re-levelled, and re-supported sunken roads and highways, bridge approach slabs, bridge abutments, culvert areas, concrete slabs, and parking areas at numerous airports, seaports, railways, and many other civil works.

Mainmark strengthens and stabilises the ground underneath the structure or approach slab to eliminate subsidence and bring the structure back to level. Because our processes are so efficient and cost-effective, infrastructure projects around the world rely on Mainmark.

With damage resolved and the structure back to full capacity, businesses can usually regain lost productivity. Mainmark can also stabilise soil and prevent slippage on slopes or embankments next to roads and railways. Mainmark’s methods are suitable for any structure, of any size. We also re-level parking areas, loading docks, hardstand areas, driveways, and roads.

For strengthening foundation ground under infrastructure, we offer a range of technologies such as our Teretek deep-lift engineered resin solution. Once in the ground, the resins and hardeners mix together and expand to compact the adjacent soils, increasing the load-bearing capacity.

Before ground excavation at a major infrastructure project, Permeation Grouting can be used to create soil cohesion, making it a good option for stabilising the ground for retaining walls and preventing embankment or bridge abutment slippage. It can be used to stabilise the ground at depths of up to 60 metres. It involves filling cracks, joints, and other generally small defects in concrete, rock or other porous media.

Mainmark’s Terefil is the most advanced structural lightweight fill for geotechnical applications. It flows into spaces to fill large voids, making it a fast, effective, low-cost, and environmentally-inert way to stabilise the ground. It is an engineered fill material ideal for infrastructure where soils are prone to slippage, holes, or voids.

Ground instability can happen naturally as part of the earth’s constantly shifting crust. It can be exacerbated by issues such as soil compaction, loss of ground moisture, excessive excavation, or erosion. Ground instability causes subsidence and, often, the damage can seem to be reversed as the ground shifts back and forth over time. However, without soil stabilisation, damage to buildings, such as wall cracks, are prone to reappear.

In infrastructure or at large industrial sites, embankment slippage can be an issue, leading to further erosion and damage. Ground instability should be mitigated where possible. Furthermore, a number of different things can cause weak ground, whether it’s a natural or man-made occurrence. For example, the ground may already be made up of loosely-packed materials such as soil or sand. Or human activities such as drilling and excavating can loosen previously-dense ground. Weak ground can happen over a large area or in smaller areas. Ground that is not uniformly weak will still lead to subsidence issues.

Different types of ground are susceptible to different conditions. For example, clay is prone to contracting in drought conditions, gravel can be affected by nearby construction or heavy traffic, and dirt can be softened by excess water. Regardless of the cause, weak ground is reason to be concerned. Subsidence is the most common issue, which needs to be fixed to protect the building and its inhabitants.

There are a number of options available to stabilise the ground, such as soil and embankment stabilisation, and void or hole-filling. For example, Mainmark’s Terefil is the most advanced structural lightweight polymer modified cementitious-based filler. It flows into spaces to fill voids, making it a fast and effective way to stabilise the ground. Compared to typical foams, the patented foam used in Terefil has increased stability, a greater lift thickness, and can be pumped greater distances. It’s a cost-effective and environmentally-inert option that suits a range of applications such as mass fill for large voids, tanks, and abandoned mines.

Alternatively, Mainmark can inject our proprietary Teretek engineered resin injection solution into the foundation ground under a building’s footings. The resins expand together chemically, creating pressure. That pressure lifts the building back to its correct level. Then, if there are weak layers in the ground, continuing injection at deeper levels can resolve this by compacting the ground, densifying and strengthening it to increase its bearing capacity. In some soil conditions, Mainmark can increase the bearing capacity of weak strata by as much as 500 per cent. In cases of weak ground, Teretek engineered resin also assures sub-grade stability under existing on-ground structures including buildings, concrete floors, driveways, roads, paved airport runways, bridge approach slabs, bridge abutments and more.